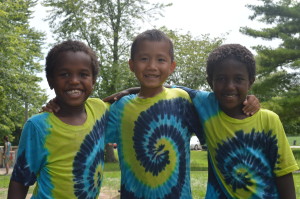 Race: the most widely used human racial categories are based on visible traits (especially skin color, facial features and hair texture), genes, and self-identification. Conceptions of race, as well as specific racial groupings, vary by culture and time, and are often controversial, for scientific reasons as well as because of their impact on social identity and identity politics. Some scientists regard race as a social construct while others maintain it has genetic basis.

Ethnicity: generally describes groups with a shared identity, shared origins, interests and codes; a given of social existence deriving from birth into a particular community of language, belief and social practice.

Culture: a social set of beliefs and practices shared by a group of individuals; people have cultural identities.

Bringing a child into your family of another race/culture/ethnicity changes your family forever. Even if the child placed with you bears a remarkable family resemblance, there is a difference. Madison Adoption Associates believes that such a difference should be acknowledged, respected and honored.